Good news! I mentioned a couple of months ago that Mayhem Intergalactic had been named a finalist in the 2008 EnhanceTV ATOM Awards. Well, I’m happy to report that the game picked up not one but two shiny perspex trophies, winning both the categories it was eligible for (Best Interactive/Video Game and Best Tertiary Interactive/Video Game). Zing! 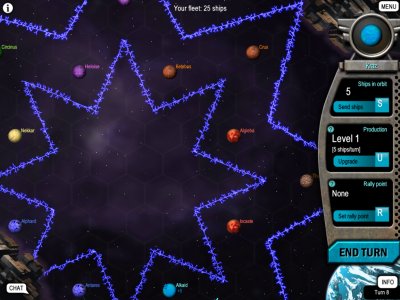 (At least, I think they’re perspex. They might be glass, although I’d expect solid glass to be heavier. I’m not planning to throw them at any walls to check whether they shatter, so it will probably remain a mystery.) 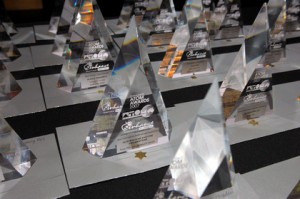 2007 ATOM Awards trophies. The 2008 trophies are the same, except for the year number.

You can view the full list of winners on the ATOM Awards website. One of the most pleasant surprises of the night (right up there with getting a pair of swanky trophies) was seeing the impressively large turnout from Narrabundah College, my old school. Not only did they raise the most deafening cheers in the whole gosh darn audience, they also swiped two awards between them and partied on into the night in style! Rock on Narrabundah!

Check out the winning Narrabundah entries (both are videos) below:

And of course, if you want to check out my winning entry, you know where to click.

The finalists for the ATOM Awards 2008 have been announced. Mayhem Intergalactic is a finalist in two categories; Best Interactive / Video Game (along with one other finalist) and Best Tertiary Interactive/Video Game (along with two other finalists). The winners will be announced at the awards ceremony in Melbourne on the 24th of October. Wish me luck!

Australian Teachers of Media (ATOM) is a professional organisation of media educators and industry professionals who are dedicated to the ongoing development of an innovative and diverse screen and media culture in Australia by providing: debate and analysis through its various publications, both print and online, the ATOM Film TV and Multimedia Awards and a broad range of professional development and training opportunities.

Voting is now open for the 2008 Indie Games Contest, in which Mayhem Intergalactic is an entrant. Please vote it up if you like it!

Just to clarify, the Indie Game Contest has nothing to do with the Independent Games Festival in which Mayhem Intergalactic was a student showcase winner (fancy way of saying “finalist”). I know, confusing, isn’t it? Still, I guess there’s only so many ways to name a contest for indie games…

In other news, the Game Developers Conference was a blast! Also, Mayhem Intergalactic and I were on TV. I should probably set up one of those fancy blog things so I have an excuse to go on and on about it! (That’s what blogs are for, right?)

(Update: Several months later… As you may have noticed, I now indeed have a blog! I’ve imported in all the old news content. - 7th June 2008)

(Update: Several more months later… voting for the Indie Games Contest has now closed. Thanks to everyone who voted! They’re announcing the results later this year. – 6th September 2008)

Mayhem Intergalactic has just been named as a finalist in the 10th Annual Independent Games Festival Student Competition! I’ll be demonstrating the game on the exhibition floor of the Game Developers Conference in San Francisco in February. Swing by the Student Showcase at the IGF Pavillion and say hi if you’re going!