FYI, I’ll be attending Freeplay 2009 down in Melbourne this year. I’m not planning at the moment to have an expo booth or a speaking engagement or anything of the kind; I’m just going to meet people and have interesting conversations.

If you’re in the area and interested in independent games development, I hope to see you there! 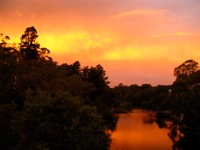 Smoke from the Victorian bushfires mixes with clouds over Warrandyte. Photo: Nick Carson.

In February I announced I’d be making a donation to the appeal fund set up by the Australian Red Cross to help victims of the bushfires that were ravaging the Australian state of Victoria back then. Specifically, I promised to donate 50% of the proceeds received by yours truly from sales of Mayhem Intergalactic which occurred between Feb 7th and March 14th. 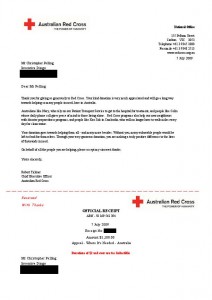 Red Cross receipt for the donation. Click for larger version.

Due largely to the inevitable lengthy delays involved in getting money from distributors and having it wired internationally, and also to this little thing I’ve got going on called “final year of university” and a lack of fondness for doing complicated accounting (this was harder to sort out than you’d think), I hadn’t done it until today.

Well, now I have (see image). Which means I can reveal how much money we raised:

Unfortunately the bushfire appeal which I was intending to donate it to actually ended before I received the money (doh!), so I rounded up to $1,100 and donated the money to the Australian Red Cross’s “Where It’s Needed – Australia” category, that being the closest available. Mea culpa. I hope nobody is too disappointed with the category switch.

Happy Mayhem raising! Just… don’t do it on Earth.

“If you do, my robot protector named Gort will release insectile nanobots to scour all the pathetic life-forms from your puny planet! To, ah… save it from you. Yes.”

P.S. For the record, my stats show that, as expected, sales did not double during Feb 7th-March 14th – they merely continued their steep post-Steam-release decline – meaning that I now have less money than I would have if I hadn’t done this. Which was, of course, the entire point. I did it for its own sake, not as a nefarious capitalist stunt as some people have claimed.