Steam customers will receive the update automatically. All other customers are encouraged to upgrade for free.

Late-breaking release note: The Steam edition mistakenly still reports itself to be v1.2.1. If you think you haven’t received the update, try restarting your Steam client and running the game again.

Those of you who use it will be happy to hear that Mayhem Intergalactic is also now available on Steam, the leading digital distribution service for PC. It’s also 50% off, for one week only, so get it while it’s hot and Steamy!

Despite the fact that this release is numbered 1.2.1 rather than 1.3, it constitutes a sizeable update on top of version 1.2. This version features the new achievements feature, and also includes a wealth of bug fixes and usability enhancements:

Owners of previous versions are encouraged to upgrade for free. New customers always receive the latest version, and the demo download has also been updated.

Mayhem Intergalactic 1.2.1 will be released tomorrow (fingers crossed). Before it hits the virtual stands, I thought I’d post a list of the achievements which it will feature, to follow up on the earlier achievements post.

Let me know if there’s a particular achievement you were hoping for that didn’t make the cut, and I’ll see about adding to the list in a future update!

Without further ado, here they are: 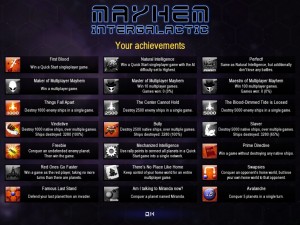 Check out the awesome icons by Fernando Yi in the screenshot! My personal favourite is the alien wearing a monocle. Fittingly, it’s also the most difficult achievement of the lot.

"I say! Could you spare a moment to direct me to your leader, old chap?"